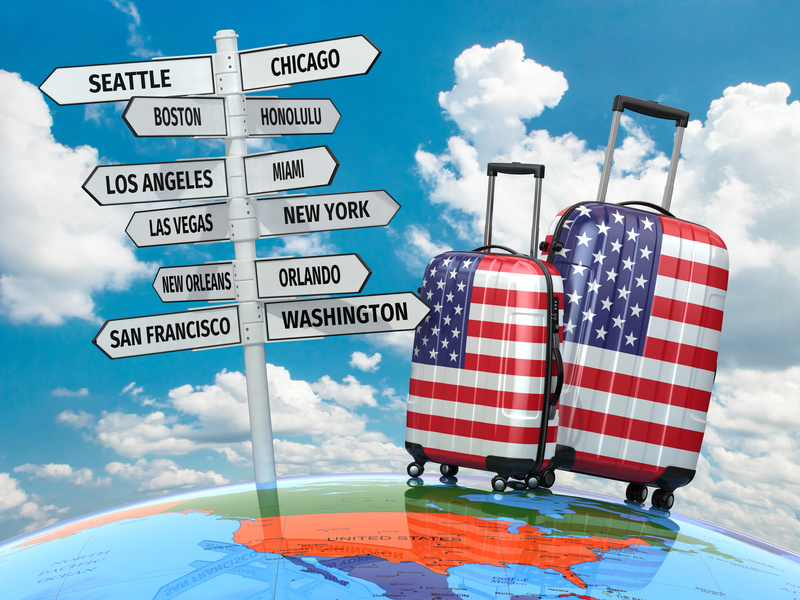 Most of the European countries and Australia are among those countries included in the visa waiver program for entry or transit through the United States visa free. All passengers must be in possession of the following document valid (including children and infants):

USEFUL INFO ON THE USA TRAVEL

Most of the European countries and Australia are among those countries included in the visa waiver program for entry or transit through the United States visa free. All passengers must be in possession of the following document valid (including children and infants):

In all other cases, you must apply for an entry visa at the Embassy or American Consulate competent in your area. Please note that the procedure for visa application is quite complex so it is necessary to do so with a good advance of the departure date.

The visa is in any case required for stays longer than 90 days and for some specific categories of travelers. Parents who are traveling separately, or legally separated or divorced persons wishing to travel to the United States and / or transit through and then proceed to other destinations with minor children, are requested to contact the embassies or consulates of all countries concerned to verify the documentation specific request.

Please note that from September 30, 2004 came into force the rules on the acquisition by the American authorities of biometric data (fingerprints and photography with digital equipment) of all passengers arriving from countries with exemption of visa. The US authorities have announced the introduction of a new electronic registration system online of the states that are part of the Visa Waiver Program Citizens of data (VWP) who are temporarily in the United States for tourism or business purposes.

The Electronic System for Travel Authorization (ESTA) will replace filling out the I-94W form, usually delivered on board, and will allow the US authorities to carry out control over the people who plan to enter US territory before their embarkation. The new procedure will become enforceable and mandatory as of January 12, 2009, and you can register online.

As of 1 April 2016, you can register ESTA only with the electronic passport (i.e. the microchip on the cover – ), the only type of passport issued in Italy since 26 October 2006.

A “ESTA” form may be completed at any time but it is recommended to request one not less than 72 hours before departure. Authorization “ESTA” (as is currently the case under the Visa Waiver Program) will not guarantee an automatic admission into American territory that will be left to the discretion of the customs and border authorities. For more information about the “ESTA” program should consult the website directly: www.cbp.gov./travel

In the presence of administrative issues arising from previous stays (eg. For speeding fines, exceeding the period of stay granted in previous trips, etc.) It is possible that the authorities are passed on to deny entry into the country, with considerable inconvenience for the rejected traveler who must return immediately to his country of origin. To avoid the occurrence of such situations, it is recommended to compatriots who believe they can have access problems in the United States for the reasons above, to ask in every case an entry visa at the embassy or consulate..

For itineraries combining the United States with Canada and as a transit, as both airport in and as a onward journey please refer to what is expressly stated in the Canada section on page 158.

No vaccination is required. However, we suggest you take out supplementary insurance that provides adequate coverage on medical expenses.

The current rules on security require that the baggage is always inspectionable by the relevant authorities.

During domestic flights, it is prohibited to close the luggage with locks or combination keys; if it will be forced with damages, those are not refundable in any way. On intercontinental routes, there are several possibilities depending on the airline used. Please ask for specific information when you will embark the luggage.

The early filling out the form which will be delivered during the flight will give the opportunity to speed up customs formalities to be completed in the first airport of arrival in the United States.

You can import, free of customs rights:

It is absolutely forbidden to import:

The import or export of currency is permitted up to a maximum of $ 10,000. Within this limit your currency does not need to be declared.

The United States is divided into the following climatic zones:

The time slots that divide the continental United States are four (excluding Alaska and Hawaii).

All the above time slots are considered from the Greenwich meridian / London time, where the convention hour is 0 – zero.

To buy dollars in the United States you should contact the bank or your own hotel, but here the exchange rates are unfavorable. it is certainly advisable to get dollars before departure from your country, also to have available cash in small denominations.

Credit cards are the most popular means of payment and convenience in the United States and are accepted virtually everywhere. With the credit card you can also withdraw cash from most banks.

A copy of your credit card will be asked at check-in to the hotel, as a guarantee for the extra expenses (telephone, minibar, room service, etc.). The same applies as well when you rent cars, motorcycles or RVs. The electron and prepaid credit cards are not commonly accepted.

The service is usually not included on the bill of restaurants. Tip, although not mandatory, is a standard practice to leave and should be equal to 15% of the bill.

It is also of use to:

At any shown price, consider an additional 7-9% of local taxes must be added that vary according to the state.

You can make an international call to your country of origin directly from the hotel room (overseas call);

just type a number (usually 8 or 9) to get an outside line, dial the prefix Intercontinental (011 + country calling code), and enter the area code followed by the desired subscriber number.

A collect call can be obtained by asking the operator a “collect call”. We recommend the use of prepaid phone cards available to buy either at home or on-site. Calling cards of your own country, however, have the advantage of allowing communication with an automated response system in their own language, rather than English (if this can be a problem).

Surely smart phone and new apps like Viber or WhatsApp can make a huge difference when connected to a Wi-Fi.

The voltage is 110/115 volts, 60 hertz. It is necessary to have a standard two parallel flat slats affordable type also likely adapter in your country of origin

GETTING AROUND AND TRANSPORTATION

In addition to the plane, the best way to move in the United States is the car that allows maximum independence and flexibility especially outside cities. The rental of an RV or a motorcycle is also an option.

The gas to be used for cars and campers is to “unleaded” (unleaded) even though there are two other types of gasoline: a normal (regular) and super (highest). The rental agreement will be in any case indicated the type to use.

The cost can vary depending on the brand, the State or the distributor; The price may be higher if you use a “full service” (the charge will also provide for cleaning glass) compared to a “self-service” where you’ll be taking care of putting fuel into the car.

In the United States, there is no official classification of hotels, so they have been assessed by us in terms of quality and market demands.

A compulsory extra charge applies to some hotels and resorts and it is locally called “resort fee”. This is to cover additional services such as use of the gym or swimming pool, Wi-Fi, daily newspaper, local phone calls or other.

They are generally composed of a Queen size bed.

If needed upon check in, you can require the addition of a third bed, (our folding bed or cot), paying on site for a supplement that varies depending on the hotel category.

Also a family room can be available, ask the hotel before reserving. In Fact family oriented hotel have big rooms with 3 or 4 beds available, or adjoining rooms.

For special requests about the bedding configuration in the room, ask it when booking.

At check-in, all hotels will require a credit card guarantee, (possibly not a prepaid or electron type card). This is to cover for any damage or extra, on which will charge an amount that varies from hotel to hotel according to the category.

When the check-out is completed, this amount will automatically be credited back to the credit card.

The family plan is the possibility that some hotels give of free accommodation to children / teenagers in their parents’ room using the existing Beds.

Because many US cities host numerous events throughout the year, such as fairs and / or congresses, it is possible that during such events and weekends Hotels levy charges also significantly higher than those published, according to the limited availability of rooms.

We use cookies to ensure that we give you the best experience on our website. If you continue to use this site we will assume that you are happy with it.Ok