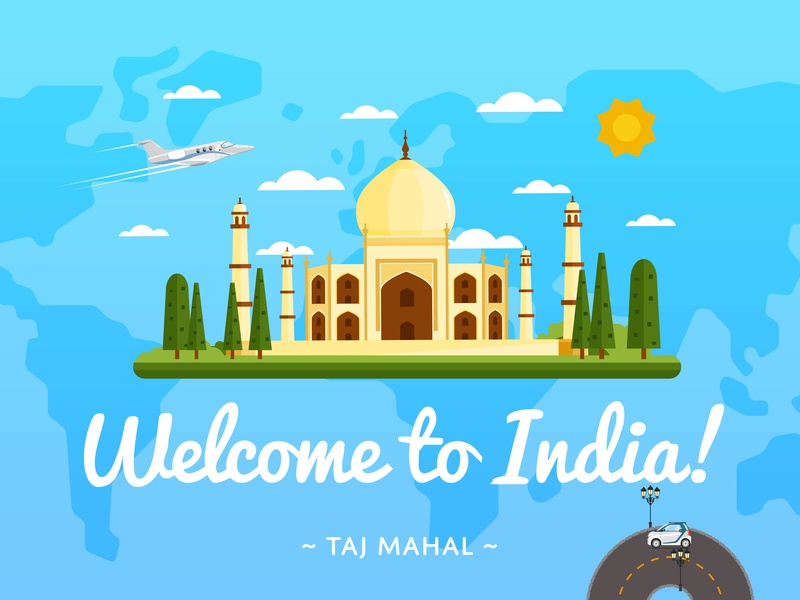 USEFUL INFORMATION FOR TRAVEL TO INDIA

India can be compared to another planet, a world apart, where past and present live together, between spirituality and pacifism. The religion and its gods, in fact, involve all aspects of society, becoming a constant presence for a country among the most populated in the world.

Languages: Hindi and English are the official languages, while the languages used are a total of 23.

Passport: needed, with residual validity of at least six months on arrival.

Entry Visa: if you need a visa for your entry, both for a pleasure or business traveler, this can only be issued by diplomatic / consular offices present in your country. The Indian authorities do not issue visas on arrival at the airport.

In 2014, the Indian authorities have set up the electronic travel authorization known as and TA. This is available at more than 112 nationalities. IT IS AVAIABLE BY FILLING IN THE ONLINE APPLICATION FORM VISA – FOLLOW ALL THE INSTRUCTIONS GIVEN IN THIS SITE

For the issuance of an entry visas you need: a passport with a minimum remaining validity of at least six months or longer depending on the length of the trip, which has free pages for affixing the visa, and two passport photos.

If an Electronic Travel Authorization it what you need, you can easily obtain that online. Just remember to apply at least 4 days before departure.

In the case of transit flights to India with final destinations such as Nepal, the Maldives and Sri Lanka, it is advisable to obtain an eTA for India, without which you cannot leave the airport area in case for example there would be a delay in the leg flight to final destination.

The local currency is the rupee (INR), divided into 100 paise. In addition to the most common foreign currencies such as the US dollar the british pound, the euro is also commonly exchanged in banks and money exchangers office, as well as at the counters of the hotels.

India is a variegated beautiful place where lots of contrasts take place. A bit of culture shock is not uncommon at first while in the country.

We strongly advice travelers to India to use a local guide to extricate in city streets and arrive at your destination stress free.

No vaccination is mandatory at present time. We recommend you take malaria prophylaxis.

When in London is on DST, India is 5 hours and 30 minutes later; Nepal, just to stand out from India, is a 5 h 45 minutes ahead and Bhutan is 6 h forward.

When in London DST is, India is 4 hours and 30 minutes later.

In India there are no public telephone booths, but there are numerous box offices, managed by private, displaying yellow sign that reads in red ISD (for international calls) and STD (for long distance calls). Call the hotel is definitely the most comfortable solution, but certainly very expensive.

We suggest you bring along sufficient supply of regular drugs. It is good practice to also have with you a prescription, if translated into English will avoid having problems when needed.
A small first-aid travel (antipyretic, painkillers, anti-diarrheal, disinfectants, bandages, etc. You may be recommended by your doctor).

Remember also that you enter in temples without shoes, then socks can come in handy.

In the north of it is recommended light clothing in summer and mid-season in winter.

In South India, where it is warm all year round, they are preferable cotton garments (avoid synthetic fabrics), without forgetting the “air conditioning” factor.

In NEPAL, usually the temperature is two or three degrees lower than that of northern India (if it remains in the Kathmandu valley).

Respect and discretion in photographing people are principles needed, especially in places of worship.

It ‘a good idea to always ask permission.

In some tourist places, you have to pay a small fee to take photographs.

Bring with you all photographic supplies you deem necessary.

All places of touristic interest offer a good choice of accommodation in hotels of various categories.
From the magnificent residences of the Maharajas, transformed into hotels, to luxury hotels in major international hotel chains.

It must be remembered that in some areas, for example in areas of particular natural interest or in mountainous areas, it is very difficult to find really comfortable accommodations.

Generally, the level of hotels is lower and not comparable with the average standard offered by Western hotels.

In your room or at the reception, you will find safe deposit boxes: use them to deposit values or important things that you do not need immediately (passport, flight ticket, money, etc.).

In India, English is the most common language in which you can find a guide.

In the following resorts and ‘can also find guides in other languages: Delhi, Agra, Jaipur, Varanasi, Mumbai, Kolkata, Kathmandu.

In India and Nepal purchases are favorable for silks, spices, jewels, cotton and wool, brocades of Varanasi, Kashmir shawls, carved marble objects of Agra, those bronze Khajuraho, or carved wooden objects of Nepal, precious stones of Jaipur, silver jeweler of Rajasthan, the “Punjabi” a dress composed of jacket and trousers in cotton or silk and magnificent “sari” multi-colored, made of silk or cotton.

Then incense, paintings and objects in the Buddhist art of Tibetan origin.

In Ladakh it is very easy to find Himalayas handicraft: objects in silver, turquoise and coral Tibetan art. It is forbidden to export items with more than one century of antiquity.

The shops of the big hotels offer high quality products, but also higher prices. The markets and small laboratories offer the best deals. Here usually negotiations is a must if you want to obtain prices.

PURCHASES NOT ALLOWED IN EUROPE

A European legislation on environmental protection prohibits the import into Europe of objects derived from worldwide protected animal and plant species.

Ivory, tortoise, some types of coral, objects made of elephant leather, orchids and rare shells, live animals such as parrots, crocodiles, etc. They are among the protected species.

Be very careful, because the purchase may be legal in India, but in the European customs you risk seizure, a very significant fine (up to approximately EUR 10,000.00), and in certain cases you could even face prison time.

There is not one Indian language. Sixteen are the official languages, and one thousand six hundred dialects …
National language thus becomes English, used in everything that is in the public interest, including the road signs.

In Nepal, the Nepali is the official language but English is also spoken.

In Ladakh is Ladakhi.

In the case you go out without your guide, we suggest you bring with you a business card or a brochure of the hotel where you are staying.

By doing so, If you’d meet a non-English speaking taxy driver, your way back to the hotel will be guaranteed.

In India, as in many other countries of the world, children have the habit of asking small gifts to tourists. If you like, you can be proactive by bringing with you candy and pens, always very welcome.

We suggest you leave home jewelry and other items of value. One less worry for you during your holiday.

If you do not want to do without it, remember to use the safes of hotels.

The Indian cuisine is famous for its aroma and fragrance of spices, which are the basis of every dish.

In the northern regions are the most common dishes of lamb, including: the rogan josh (lamb curry), biriyani (chicken o Lamb with orange rice, sprinkled with sugar and rose water), tandoori (meat, chicken or fish marinated in herbs and cooked in a clay oven).

Common to all of India is the excellent dhal (crushed lentil soup with the addition of different vegetables).

The Dhai (curdled milk or yogurt), associated with the curry dishes, it is very refreshing and most effective of the drinks in hot weather.

Closes the list a wide choice of desserts and a wide variety of fruits, both tropical and typical of more temperate climates.

The Indian beer and gin are excellent.

In hotels and restaurants frequented by tourists it is customary to leave a tip.

All operators / employees who work with tourists expect to be tipped (the porters of the hotel for example expect a tip between 5 and 10 rupees per bag).

In smaller premises, the gratuity is not mandatory, but still welcome, and is enough to leave few rupees.

Tipping is not mandatory and there is no standard rate, we suggest you rely on your common sense, giving a tip if you are satisfied with the service received.